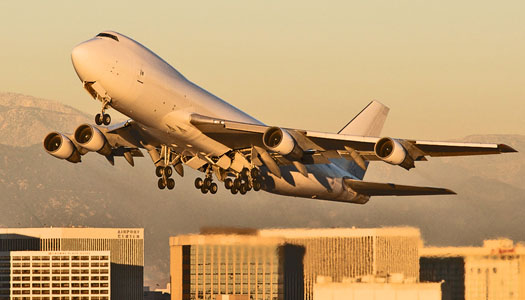 As a result of the decision by the U.S. 9th Circuit Court of Appeals, the FAA must undertake a proper environmental analysis that should have taken place prior to implementing the changes in 2018, according to Feuer.

Two years ago, the city sued the FAA, alleging the agency made changes to flight patterns with neither environmental review nor public input.

“The FAA made changes to a major flight path over Los Angeles without considering the noise and environmental impacts for residents below, and without consulting the city,” Feuer said in a statement. “That was wrong and it’s why we fought. We are very pleased that the court agreed with us and ordered the FAA to finally conduct a full environmental review which, unlike last time, will include public comment.”

The appeals panel on Thursday held that the FAA violated three key federal environmental laws by implementing the flight pattern changes at LAX as part of its rollout of its Next Generation Air Transportation System: the National Environmental Policy Act, the National Historic Preservation Act, and a section of the Department of Transportation Act.

The court ordered the FAA to undertake proper NEPA and NHPA analysis and to consult with the city of Los Angeles regarding the Transportation Act.

While the problematic flight patterns will remain in place for now, the court’s ruling requires that the FAA undertake a more transparent and public process moving forward.

Five years ago, as part of the FAA’s implementation of the SoCal Metroplex Project and NextGen procedures, the agency started changing flight patterns for aircraft landing at LAX, including consolidating flight patterns over the West Adams neighborhood and other communities in mid-city and Central Los Angeles, causing significant noise and environmental impacts.

In May 2018, the FAA made additional changes to incoming flights but allegedly failed to perform the required environmental review or seek public comment. These changes prompted Feuer’s lawsuit.

The city of Los Angeles previously requested the FAA address a series of specific modifications to at least partially provide some relief to residents, but that proved unsuccessful, and the city filed its lawsuit in June 2019.

Among other things, the city claimed in its suit that the FAA failed to comply with its own procedures and properly consider all of the environmental impacts of the changes to its flight patterns for incoming aircraft at LAX. During the course of litigation, FAA presented documents to the court that allegedly confirmed that environmental review had occurred, but the court held that the documents were deficient because they postdated the publication of the flight pattern changes by several months.

The lawsuit is one of three that the city has brought against the FAA on behalf of the city in regards to NextGen. The second concerns southerly departures from Hollywood-Burbank airport in which the city alleges that the FAA admitted in the summer of 2019 that there has been a “southerly shift” of airplanes — that similarly never underwent environmental review — affecting residents in Studio City and southeast San Fernando Valley, possibly the Santa Monica mountains and others not near the airport who are now experiencing air traffic for the first time or to a degree never before experienced.

The FAA denied the city’s request to remedy the southerly shift on the basis that FAA had not caused the shift. The third case has to do with the city’s Freedom of Information Act request in regards to flight procedures at Hollywood-Burbank Airport. Feuer’s office has since received the requested documents, and the parties are negotiating resolution.

Feuer said he has been communicating directly with the FAA’s Regional Administrator, the FAA’s counsel and members of Congress seeking to obtain relief for impacted residents. Additionally, with federal and local officials, he has pushed the FAA to conduct a thorough environmental assessment of prospective flight pattern changes over the south San Fernando Valley and Santa Monica Mountains.

The FAA agreed to conduct that assessment and to consider dispersal of flights in the process, Feuer said.

On Monday afternoon, Feuer announced the city will sue the FAA again, this time alleging deficiencies in the environmental review process for a proposed replacement passenger terminal at the Hollywood-Burbank Airport.

“This is yet another necessary step in our extensive efforts to fight for the residents of Los Angeles who have been negatively impacted by the operations at Burbank Airport,” said Councilman Paul Koretz said in a statement. “We will not quietly accept any environmental review shortcuts made at the expense of the citizens of our city. The responsible agencies must do right by our communities who will be burdened by these changes for the foreseeable future.”

Feuer alleges that the FAA ignored the city’s comments during its environmental review process for the terminal project.

“Last fall we asked the FAA for additional time during the DEIS (Draft Environmental Impact Statement) public comment period to ensure the city’s concerns, along with the concerns of our constituents, were recorded in the process,” said Los Angeles Councilman Paul Krekorian. “At the time our city departments raised serious questions about the potential negative impacts of this project. This litigation creates the opportunity to address those impacts.”